Random things from the internets today.

The Zombie Apocalypse of Daniel DeFoe, from Lapham's Quarterly:


Defoe’s novel, published in 1722, is a mutant factual-fiction that recounts the plague epidemic of 1665, which dispatched almost 100,000 Londoners. Purporting to be the “memorial” of a survivor known only as “H.F.”, it was based on genuine documentary sources, including the diary of Defoe’s uncle.


Made by an unknown artist or artists, the scroll depicts a number of different scenes - all linked by the fact that at least one character is directing a debilitating blast of flatulence towards another character.


This is so cool I can't even begin to tell you:


This fantastic contraption, called the ‘Routefinder’, showed 1920s drivers in the UK the roads they were travelling down, gave them the mileage covered and told them to stop when they came at journey’s end.
The technology – a curious cross between the space age and the stone age – consisted of a little map scroll inside a watch, to be ‘scrolled’ (hence the word) as the driver moved along on the map. A multitude of scrolls could be fitted in the watch to suit the particular trip the driver fancied taking. 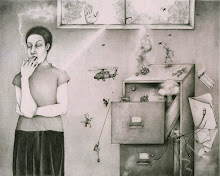